Reigning Champion Lewis Rattray has taken out the first round of the Dirty Deeds Urban Cyclocross Series in an impressive display of skills and raw power.

In a field chock-full of cycling talent, including former Australian Road Race Champion Alan Iacone and Mountain Bike World Cup representative Andy Blair, Rattray hit the front from the first lap and did not put a dismount wrong for the next forty minutes, lapping nearly the entire field in the process.

With Rattray’s devastating skills in the mudpit, over the barriers and across the grass in full effect, a chase group consisting of Iacone, Blair, Daniel McMunn and former Dirty Deeds race winners Mat Gray and Jeremy Soawyer banded together to attempt to drag Rattray back into the field. This was to no avail, however, and by the third lap this group had begun to fall to pieces as the mammoth task took its toll. A considerable time after Rattray crossed the line to take first, Blair came across to take second with Daniel McMunn holding on for third.

Rattray goes into the second round of the series in impressive form, and there will no doubt be considerable discussion regarding how exactly to catch him.

The support races were no less exciting, with Warrack Leach earning a promotion to Elite in the B grade cyclocross race, after a commanding win over Simon Carey, with Thomas Crowler taking out third. The women’s cyclocross category was also hard-fought, with Emma Caddy and Kate Lansell riding neck and neck for the majority of the race, Caddy snatching the win from Lansell at the last moment, with Laura Choong a surprise third place.

In the Open Category – for those without Cyclocross bikes – Merida Flight Centre’s Adrian Jackson made an appearance and swept all before him, leaving spectators to wonder what would have been with a Blair / Jackson battle in the cyclocross category. Cam MacKenzie held on for second place, with Craig Maclean coming home third. And in the Open Women’s category the Trailmix team proved dominant, with Amity McSwann taking a fine win from her teammate Erica Gunner, with Jade Forsyth third.

And, finally, in the Kid’s races, the Trailmix team once again proved there is something in the water out at Lysterfield, with Sam Wilson crossing the line first, ahead of Brunswick Cycling Club’s own Adam Blazevic. Ben Walkerdon took out third.

The next round of the Dirty Deeds Cyclocross Series will take place at Jackson Reserve, Coburg on July 17th. 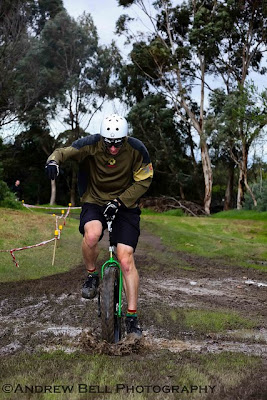 A lone Unicyclist came down to race on Sunday, and despite concern on the part of the organizers, actually rode most of the course in the Open Category. Chapeau, Unicycle Guy. Photo by Andrew Bell. 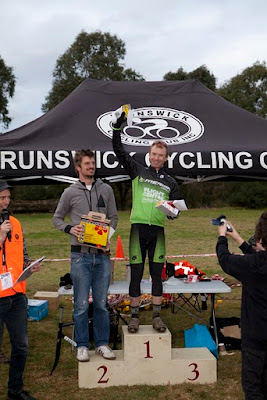 As mentioned above, AJ tore everyone a new one in the Open Category, but Cam MacKenzie showed some bitter determination and rapidly shed clothing in order to hold on for third. Photo by Brian Mangano. 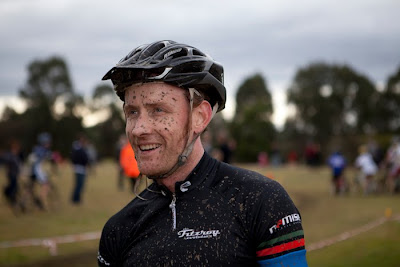 Duncan Murray didn't win, but was still totally stoked after battling the mud in the Open Category. Photo by Brian Mangano. 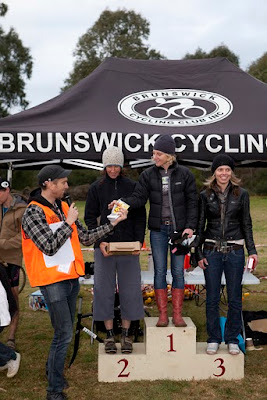 The Women's Open Category was equally hard fought, with Amity McSwann stealing the win away from Erica Gunner, with Jade Forsythe third. That's Amity in the middle, getting some socks and a sticker for her efforts. Photo by Brian Mangano. 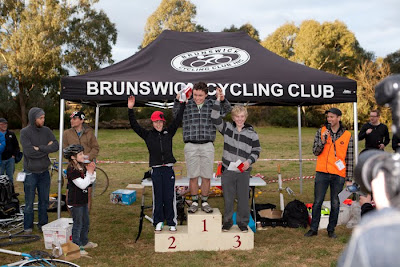 For some reason there's a lack of photos of the Kid's Category this time around, but here are the winners. I swear by this time of the evening that kid in the middle had a five o'clock shadow. Photo by Brian Mangano. 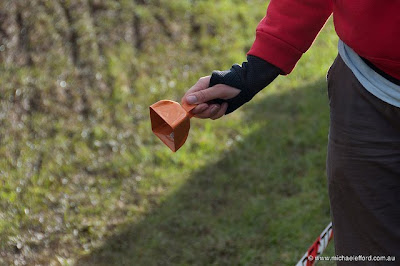 While I'm still a little disappointed that no-one has yet brought along a lagerphone, the cowbells were out in abudance, and made one hell of a racket. Those who didn't have cowbells seemed to have raided their kitchens - folks were banging on teapots, saucepans and frypans. Chaz, however, took it up a notch and used an old set of front bike forks, which were surprisingly effective. Photo by Mik Efford, who also rode in the CX B grade, on his own homemade bamboo bike. That's a multi-talented individual right there. 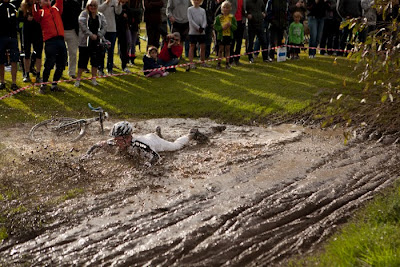 When the Open Category showed a distinct lack of interest in the "Best Dressed" award, I was worried that we wouldn't have anyone to give a bike frame from Larry's Custom Cycles away to by the end of the day. Boy, was I wrong. This guy here not only dressed entirely in white, but was the talk of the hill, pitching first his bike into the mud pit, and then - in the moment you see above - pitching himself. Problem is, he had gone home by presentation time - perhaps to wash off the stench - and I was proven correct. The frame is sitting in the corner of my house right now, looking pretty nice, I gotta say. Photo by Brian Mangano. 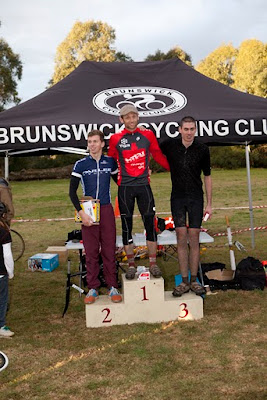 See these guys? Come July they're all riding A grade. Sorry Tom! Photo by Brian Mangano 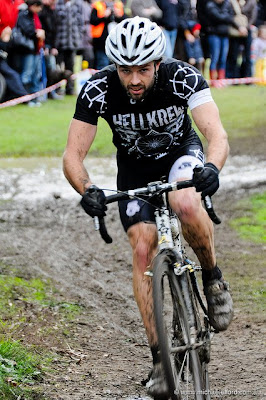 Jeremy Soawyer represented team Hell Krew and battled well to eventually score sixth place. The rest of Hell Krew fared less well, but were nonetheless still banging their heads at the end of the day. I stole this photo off Jeremy's facebook, and have no idea who took it. 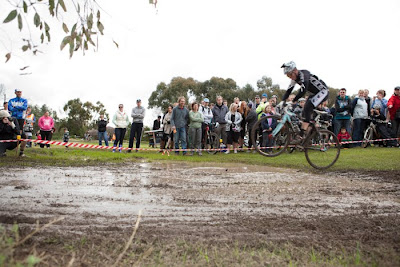 Jimmy Maebus, complete with video camera attached to his helmet, attempted to bunnyhop the mud puddle, but fell drastically short. Or perhaps this was his intention - with all the beer / cider / lemonade sprayed on riders throughout the day, it was probably time for some sweet revenge. Photo by Brian Mangano. 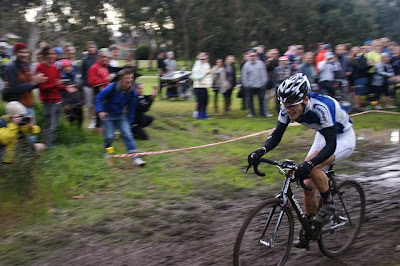 Winner Lewis Rattray not only took out first place in the A grade race, but also scored the "HOLESHOT RULZ" award put forth by Sean "The Man" Hurley and Cam MacKenzie. This award was for the first person to complete one lap, and Rattray made himself an extra $60 for his efforts.

Strangely there are no photos yet of the A Grade podium, but I think Mikkeli Godfree of Enduro Magazine took some video, which will definitely be added to the new video page whenever it appears.

For the sake of safety we capped the numbers on the day, and will be doing this again in July. CX A grade will be capped at 60 riders, CX B grade will be capped at 80 and Open will be capped at 100. Kids will remain unlimited, especially if they keep turning up on sweet mini CX bikes like that one kid did on Sunday. We'd like to apologise to anyone who missed out on riding, and would subtly nudge them to turn up earlier on the 17th.

Full results are, of course, available here. We probably got some of them wrong, and we'd also like to apologise for that. I'm not going to tally up the aggregate just yet, because I'm tired, but you can figure it out like this: if you rode, you get a point. If you won, you get an extra five points on top of that. If you came second, an extra three points, and if you came third, you get an extra two. We know that we made a major booboo in the Women's CX category, and will be factoring that into the aggregate.

And finally, we'd once again like to thank the following, without whom this little community would never have been built: Brunswick Cycling Club for their unwavering support, and for providing marshalls, and for dealing with the licences, and for, well, just being the raddest little club in town; Adrian Infanti from Darebin Parklands, who went above and beyond the call of duty, providing us with access, power and water - and then went out and rode in the Open Category. What a champ!; Jen McIntyre for being the most ruthlessly efficient first aid person in the world, even if she only had to tend to one guy all day; Sarah from CSV and Kimberly Morgan from BWK for sitting on the judges table all day; Everyone who sat on the rego desk - one of life's most thankless tasks (until now!); All of our sponsors - again, that's them on the right of this page, go click on the links so we get sweet click-through numbers and then they love us even more; All of the folks who brought down tents, regardless of what they were selling or displaying - it makes us look like a travelling roadshow, or even like Lollapalooza, which totally rules; The Vegan bakesale - I missed you guys; Kipp from CSV for his behind-the-scenes support and for organizing a CX event I might actually get to ride; All of the riders; All of the people who wanted to ride but couldn't get a bike organized in time; All of the people who secretly wanted to ride but didn't because they were nervous or worried or didn't want to get muddy; All of the people who really, really wanted to ride but couldn't because they were too hungover; And finally, everyone who came down to support the event in the best way we know how - by yelling, heckling, handing up beer and lemonade and even a freaking cigarette, clapping, oohing, aahing, sighing, groaning, and occasionally singing and dancing. You guys rule.
Posted by brendan at 20:02