I should be writing an essay but thinking about cyclocross is much more fun. The essay is about cycling and women's mobility in Melbourne and Montreal so I am not straying too far off topic (she says not fooling anyone but herself). Back to CX ...

Spring is upon us and even though I am excited about the prospect of warmer weather, leaving winter behind also means that my Melbourne cyclocross season is almost over. I could venture to Lysterfield or out of the state with the DDCX contingency heading to Adelaide but the reality of a looming thesis deadline means the Victorian Cyclocross Open will be my last race of the season. Bummer.

I just don't feel ready to hang up the pink flames until next year. There are a few reasons for this:
I imagine I will not be alone in experiencing the post-cross blues that is due to set in around October. A few people have already expressed their interest in some spring/summer/autumn training so they are ready to go once the 2012 season kicks off. Now that's the spirit!

So if you, like me, are unwilling to let go or if you were watching from the sidelines in 2011 and want to get amongst it in 2012, get in touch. We could arrange some group rides, skills sessions - whatever you like. But not before I get the evil thesis monkey off my back at the end of October. If you would like to do something before then I can put you in touch with other keen beans. Email me: katelansell@gmail.com

OK, back to work (read watching Lucinda Williams on you tube).

EDIT: Now with the correct day!

Word from the north of the state:

THE WANGARATTA CYCLO CROSS will happen on Sunday September 17 at the club rooms, (Shanley St, Wangaratta.)

It is more of a trial, to see if an event will be supported around here, if successful then there will be a series with perhaps 2 races in wangaratta, one in albury, and one in bright/mt beauty.


The course is basic, fast and flat. It's a bit boggy in places.But can ridden on a 42 chainring.

There are no sponsors, so prize money will be dependent on entrys. 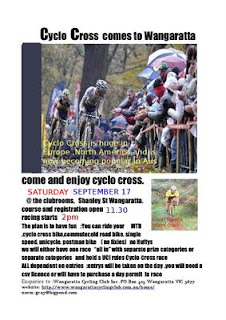 Consider yourselves all invited... unfortunately the 'cross racing component of DDCX HQ will be inter-state seeing how the croweaters run their races, (apparently with less mud).

In other updates this summarises why I like riding my cross bike with fast friends on the weekends rather than racing on the road (for now). I also predict it will also spur Brendan to tease me about it as well.
Posted by nikcee at 20:00 8 comments:

And, while I have your attention, the 4th ever Melbourne Gravel Grinder is taking place tomorrow. That's a windy part of the world right there. Dirt road echelons, anyone? Perfect base miles for the next Cross Melburn race, or the CX Open mentioned below.

I've heard a couple of key things about this race. The first is that the starting grid will be based on your ranking in the Dirty Deeds Aggregate, just like a UCI Cyclocross World Cup event. That's right, we play like the big boys.

And the second is that this race is a precursor to a Victorian Cyclocross Championship, so get out there and support it. Because once we have a Victorian Cyclocross Championship, we're ready to have a National Championship. You get the picture. We love our little races, and we love how anyone can enter and have bucketloads of fun, but just imagine if riding your bike through mud for an hour could result in you wearing the green and gold stripes. For Real. And then... wait for it... go to the Cyclocross World Champs.

Oh man, that's full on. Seriously. I'm having trouble believing that this little community, that started on a hot February night with Matty Bowen drawing lines on the ground around the Hawthorn Crit circuit, is turning into something this big. I gotta say, I'm proud of my part in it. And I'm proud of all of you, for making it as awesome as it is.


Ok, ok, the full results are coming soon. But in the meantime, here's another link to some guys who just seem to get it.

Oh, and here's another report from our kindred spirits across the border.


As you may have noticed, I'm a wordy individual. So it should come as no surprise that I like people's race reports as much - if not more - than all the photos. They're starting to come in, like this one from Ross, or this one from Greg. Incidentally, Greg's booboo represents our first broken bone. I'll check with Blakey, but I think we may have a couple of spare musettes - if we do, Greg, you just earned yourself one.

If you've written up a report, send it in!


Some issues with the blog at the moment. We're working on it. Apologies for any inconvenience.

Edit: The problem seems to be with Internet Explorer. Please use a different vehicle for enhanced Dirty Deeds viewing pleasure.

Think I Was Born In New Jersey.