Cuts Across the Land

I'm not sure what to say about the course for Zonhoven at the recent Superprestige race.

Take a moment to reflect on how destroyed your legs and drivetrain would be after racing it...

Or for the more gravity inspired rider... CX goes downhill

A quick reminder that this is on SUNDAY.

The last round had arguably the best course of the series with a sweet run-up and descent plus more BMX track to carve up.

In other news I highly recommend pavepavepave's excellent Cyclocross Power Rankings for those who are following the goings on on the other side of the planet. While not as 'entertaining' as cyclingdirt's weekly ranking they are more digestible and very helpful for the time-poor amongst us.

Is anyone else looking forward to a showdown between Styby and Boom? Oh, and I agree, don't write Nys/Johnson off yet... both have been around far too long to let a couple of middling results hold them back.
Posted by nikcee at 21:11 No comments:

Ease Your Feet into the Sea

Some bad news hit the inbox this morning...

The cyclocross component of this has been cancelled. For more information see here and here.

However to offset this here is a picture of Zach McDonald doing a wheelie across the line after yet another U23 victory. 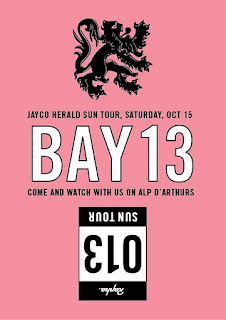 Friend of DDCX, quality blogger and fast racer Wade Wallace asked us to put the word out about a little event he is putting together for the Arthur's Seat stage of the Herald Sun tour this Saturday.

He is hoping to get a bit of the excitement and enthusiasm that we saw at our series this year.

This will be a HUGE! Bigger and rowdier than Dutch Corner. We're bringing Bay 13 from the MGC to Arthurs Seat. There will be food vendors (The BeatBox Kitchen and Taco Truck), coffee, music, and a sea of pink so you cannot miss it. We'll award everyone who wears something pink with a Rapha prize (until we run out). Bring your Aussie flags, noisemakers, BYOB (to keep hydrated of course) and whatever else you need to be seen and heard. This will be broadcast live on SBS2 and we don't want it to look like the Tour of Beijing, do we?

I've reserved Franklin Point, or Bay 13 as we're calling it, which sits a couple kilometers up the road (see map). It features an amazing view of Mornington Peninsula and is the steepest part of Arthurs Seat (16%). When the riders attack, this is the place they'll be launching their fireworks. This is the place the Sun Tour will be won or lost. Matty Lloyd wants this one bad and we can give him the roar he needs to take victory and show Omega Pharma Lotto what they missed out on. 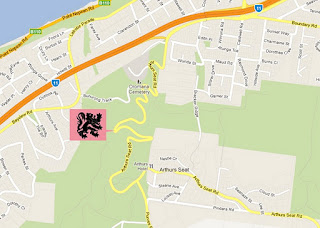 Times
Recommended time to get to Bay 13 is 11am.

The Men's Race begins from Sorrento at 1pm and ends at approximately 5pm (doing 3 laps around Arthurs Seat and finishing at the summit). They'll be hitting Alp d'Arthurs at about 1:30pm.

Wade loves cycling and knows PRO, so having been to a couple of his events before I can be sure it will be a great day out.
Posted by nikcee at 19:55 No comments:

See The Sky About To Rain

I'm still here... and given that 'cross season is now in full swing there should be no shortage of posts appearing in the coming weeks.

This has been sitting in my browser since it appeared in my RSS feed.

Things to note:
Even if I still think Sven Nys is my favourite euro cross racer doing laps, Bart Wellens has won me over a bit with his funny interviews and good attitude.


Bart Wellens - Off the Record from cycloWHAT? on Vimeo.
Posted by nikcee at 14:18 No comments:

The Last Last One.

Folks, I'm out. Running the DDCX series has been an honour and a privilege over the last two years, but I gotta concentrate on my own racing. If you wanna keep up with my hilarious thoughts on the universe, they are generally available here. In the meantime, I believe Nik will continue to run the blog. I wish him and all the rest of the DDCX crew all the best.
Posted by brendan at 03:32 1 comment:

Still Waiting For The Punchline

So life caught up with me and I still havent finished the report on the road-trip to (r)Adelaide. But let me tell you, sprained ankles aside, it was a damn fun trip.

A quick recap of the 3rd Round of 'Cross Melburn' 2 sundays ago...
Hot! Fast!

The weather was its warmest yet (making bottle handups very helpful).

I missed the Opens races, and in doing so missed the chance to provide support to DDCX Junior Girls champ (and DDCX podium star) Emily Hughes. This was entirely unfair as her voice cheered me heartily in my race... all whilst she took laps on the pump track!

Photos from her dad can be found here, and the following is his report of the race:
"In the Junior boys the Trailmix guys had a clean sweep, with Sam Wilson and Liam Jeffries battling it out for 1st and 2nd respectively


In the open class Junior girls, Emily and Georgia rode closely with the lead changing several times and it was looking like a close finish until Georgia Wilson (Trailmix) crashed out on the last lap leaving Brunswick cycling club’s own Emily Hughes (red kit) to lead the junior women home. We hope Georgia is back for the final round on the 23rd October"


Despite a reduced turnout that meant all Cx categories were run as a single race, on what was arguably the best course that Cross Melburn has had. Or maybe I'm just a sucker for tricky run-ups and remounts... After a rubbish start I did battle with perennial DDCX Juniors threat/U15 MTB champ Liam Jeffries all race. Meanwhile up the pointy end of the race Allan Iacone quickly separated himself and set out on his own. Simon Carey (raing sans Cycling Edge support crew) and James 'No Onesie for Me' Grover filled out the podium. I also heard talk of Snozza being tormented by one of his quite junior team mates until a wily last section kick got him over the line first.

Thanks to the previously mentioned sprained ankle Mr Blakey was once again on duty as my mechanic/bidon hand-up guy. But this time he was also recruited into service by Snozza for prize hand-ups.

Photos of the sunglasses and lube he passed out via his nifty hand-up stick can be found here.

There are no photos of the eye-searing 'skittles' colourway specialized cross bike that were 'on show' and being raced, but if you want to be noticed you should look into them!
Posted by nikcee at 21:01 No comments: