I Don't Do Well In Social Situations

Like the mud that has finally arrived in Europe I welcome the return of my second favourite CX video series.


Like the similar style of musical accompaniment it employs, it's focus is also on the behind the scenes of CX racing something that all the sporza.be videos with their shouting flemish commentary can't match.

Any thoughts that the women's racing isn't as hard. or a lesser event (yes, I"m looking at you GVA and Superprestige series) is quashed with their post-race scenes.

The World Champs will be held at the same location and from the footage here and from the men's race it's going to be a serious battle of skills and willpower (and maybe an upset in the Women's race?).
Posted by nikcee at 21:05 No comments:

The Youngest Was The Most Loved

A slew of interesting articles are sitting in my browser as I ponder a thread to sew them all together... and then this veritable onslaught of amazing imagery emerges from the SSCXWC (Single Speed Cyclo Cross World Champs) held last weekend in SF.

Ladies and Gentlemen... your new winners of the "Golden Speedo/Bikini" and prize tattoo.

Yes, they are both UCI-level CX pros but by all reports (and photos) they fully embraced the spirit of the event. For a better example of what the event is about check out the video of the mens start

In the midst of that race you have several world cup level MTB racers and domestic road pros. In the women's race (first full field at a SSCXWC) they had a number of national champions lining up. Many of whom came to enjoy the race as much as

There are more links on the Event home page if you want to see more of the high jinx racing that went down.

Next year is Santa Cruz... and I'll admit to being very tempted.
Posted by nikcee at 03:24 4 comments:

The Last Pale Light In the West

Greetings Cross Fans...
We have had a letter arrive in our inbox that might apply to some of you out there...
"I am writing a story about unusual sports and was wondering if you knew of any cyclocross competitors from the Western Suburbs, particularly Broadmeadows, Craigieburn, Tullamarine, Werribee, Macedon Ranges, Sunbury or Melton."

If you can help please contact: Laura Little from The Weekly.

In thanks I give you a shot from the amazing Zonhoven Superprestige course of a couple of weeks ago. 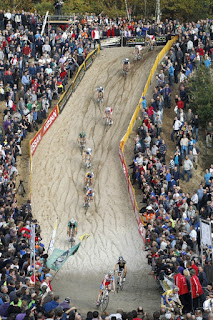 The In Sound From Way Out!

Sometimes you need to throw some fireworks in the fire to get people talking about why they feel so strongly about something...

The excellent hands/brain behind INRNG did something similar with this post, and in doing so (successfully) sparked up some lively discussion in his own comments, as well as spawning these replies.

Yes, given my involvement with 'cross and the fact I'm even typing this it's pretty easy to know what side of the barrier I fall on, but even having said that I think it's great to see it laid out on screen. It's not a discipline that suits everyone in a sport that doesnt interest even more, but there's a lot of fuss/buzz/noise aorund CX right now and for some the 'What gives?' question is a valid one. Even moreso becuase it has become such an entry vector into competitve cycling, and in some cases competitive sports, for people.

For those that have been embracing an embrocation-scented, mud-covered lifestyle for a while it's also good to reflect on what was, what we now have and what we might hope for...

For others it's just neat to see cross talked about with passion... and remind them of the good times that are had playing in the mud.