Words by Hamish, commentary by Blakey, content by you guys.

---------------
Firstly, a reminder. If you enjoyed racing/spectating and you haven't already, please provide some positive feedback to Darebin Council & Darebin parklands. All the details are here:
http://dirtydeedscx.blogspot.com.au/2013/08/did-you-enjoy-darebin-parklands.html
---------------

They came to finish the party in style. After the explosive events of the national champs on Saturday, how was DDCX gonna top the spectacle of Lisa Jacobs masterful display and Alan Iacuone’s surpise attack to win national jerseys two decades apart?

I’d like to say it was Blakey’s Erection (the steel tubed folly in the middle of the course that was one man’s dream where others scoffed) or was it the  sheer awesomeness of the Darebin Parklands course and the even bigger awesomeness of the Parklands people in letting us use the land. Or was it the promise of free, guaranteed entry into CROSS VEGAS and accommodation in Las Vegas for the elite winners that lent a certain sepia stained air of epic to the day? 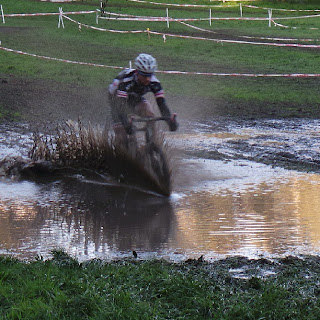 Of course it was all those things but, shucks, it’s YOU GUYS who make Dirty Deeds. Without over three hundred of you pinning numbers on, plus who knows how many hundred more screaming on the sidelines, the event would be nothing more than a solo tractor pull in a muddy field. 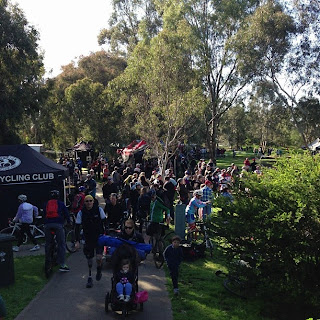 Before we get too emotional here at DDCX HQ, due to lack of sleep and race organizing freak outs, let us cast out any more comparisons to the effing Catalina Wine Mixer. This was bigger…far bigger.

A day from the monsters of cross greeted us on Sunday after the bitter chill and rain of previous days. It may have looked sunny and clear, but as soon as you stepped on the course you knew it was going to be a mudder's dream.

Pre reg had worked a treat, too well in fact, most races were full and there were some unsmiley faces for those who got there too late to actually hand over your license before the cut off time. A Maserati and a crabon cx bike served up with a topping of attitude ain’t gonna cut it in the inner north pal.

The kids race was a ding dong battle of the balance bikes. The young man in the spider man outfit used all the super hero powers at his disposal to win hearts and minds and therefore cast aside any competitors for Cute rider of the Day. 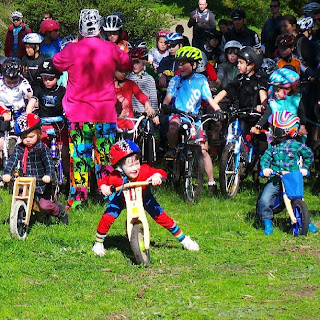 Tate Heiskanen was forced into a quick costume change as he and the little dude obviously failed to consult. A stuff up with our system meant girls and boys results were skewed prompting tears and complaints about kids not getting a prize. Deal with it. It’s character building. The real prize is getting rad and not having to do your own laundry

Open caught a lot of the spill over from the CX grades that were chockers so some thought cross racers might dominate the 2.5 k course so deviously dished up by Nik C. not so Jack Lamshed occupies number one spot followed by Duncan Murray and Alexander Carisotis in third.

In B grade, Liam Jeffries, who we’ve seen go from being a fresh faced kid ripping apart the junior races in years gone by, to being a fresh faced kid ripping apart senior races, put on a display that without doubt heralds him as someone destined for great things on a bike if he so chooses.  Dan Moore from sponsors Jet Black/BH put in a huge effort to come in second, but it was at the tail end of the field that the spirit of CX shone (aside from the beer hand ups at the bottom of the course- more about them later). Alex Ivanof broke a seat post and rather than DNF, ran most of the end of the race, a good two laps we hear. In a display of cool sportsmanship he was ushered through by Shaun Urie- a Dirty Deeds stalwart, allowing Alex to finish the place before DFL. To me, this is what CX racing is all about. That, and getting filthy and having a good time. At 100 riders this is probably the largest grade we’ve run. 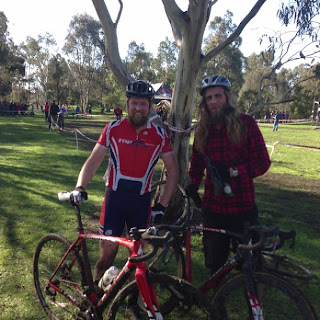 By the time the women’s elite race was one the crowd was hungry for fast and furious cross. The stairs, ramp, flyover combination dreamt up and executed by Andrew Blake and enabled by our main sponsors SRAM was where races could be won and lost. 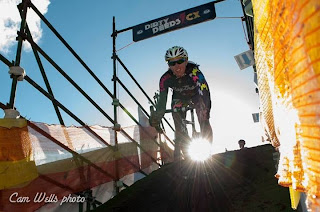 
Tasmania’s Rowena Fry has been leading the national series and her loss to Lisa Jacobs for the national title was the big story of Saturday. While Lisa had the jersey with the stripes Rowena could salvage a series win if she hung on in the top ten.

In the race for the title though Rowena was struggling with mechanical issues and an unrelenting pace from South Australia’s Sarah Holmes, April McDonough, the ever smiling Mel Ansett and the freshly crowned national women’s masters champ Jenny 'honey badger' Macca (one of the main folk behind the DDCX women’s development squad- check it out on Face thingo if you happen to be a CX-curious female). In seven laps and 48 minutes on the course it was Sarah in first and off to Cross Vegas if she wants.. April, then Rowena in fourth, hanging on despite a strong challenge from Jen to take hold of the national series title. 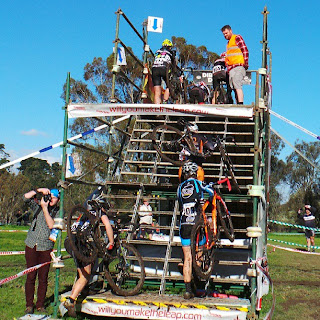 It was gonna be hard to top that one but there was one big guy who knew just how.

Men’s elite came with an air of expectation. The racing had been quality and fought all day so naturally folks wanted more. It was a genuine national field with competitors from all over the place keen on planting a foot or two on the podium.

In one of the fastest starts around led by the crowd favourite Leigh de Luca, who was gunning for the Impact Massage KOM, an elite group of riders formed from… the elite group of riders. A pack of about 6 riders emerged to take control of the race. Former Olympian Sid Taberlay (NSW),  Gary Milburn (NSW), Andy Blair (Vic), newly crowned national champ Alan Iacoune (Vic), Paul van der Ploeg (Vic) and Cameron Ivory (NSW) traded places and half way through the 50 minute circuit anyone of them looked like they could take the race. That is, until IT happened….

If you’ve never seen Paul van der Ploeg ride a bike you should. It’s a sight. When he and Cam Ivory got a lead on the other riders they rounded the corner and shouldered their bikes to jump the barrier placed before the stairs on Blakey’s Erection, all 6 foot 4 of Vandy (that’s 193cm) took off. Taking two stairs at a time he seemed to vault the flyover and sped off down the ramp leaving Cam and the rest of us to wonder what we had just witnessed. In case anyone missed it Paul repeated the sprint up the stairs on the next lap to win it from Cam and Andrew Blair.

Paul’s been selected to represent Australia in mountain biking and after seeing him ride on Sunday you’ve gotta feel for his forthcoming opponents. You also have to feel for that poor skinsuit, being torn off his enormous frame in the final lap so that he could cross the line like so: 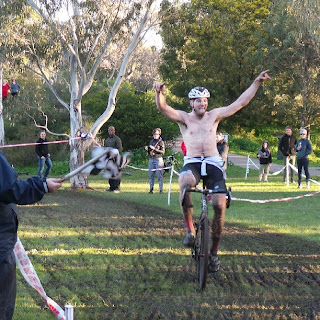 All results from the day can be found here (If your name is Cam Woolcock, just replace Malachi Moxon in Elite with your name and all is well! Sorry Cam):

Whilst Nik's homage to Pavlis' Hill was a spectator favourite, the choice spot was at the u-turn after a sizeable mud pit. First the kids asked the riders nicely to ride through the puddle and make a splash, then the adults, then everyone screamed at the riders as they barrelled down the hill "GO RIGHT, IN THE WATER, DO IT!", this resulted in some marvellous mud porn, some loose as all get out two wheel drifts, and quite a few crashes. Oh, and a hell of a lot of cheering that carried all the way up to the very top of the course, drowning out the amplified voices of Brendan & Hamish.


One of our only racers with a BMXA licence, Bryan Bull, shot some excellent footage of the mudpit, watch through to the end for an amazing passing move, and imagine Yakety Sax is playing. 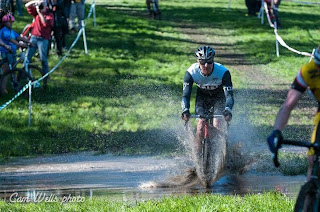 So that is about it.

Thank you to all who came. Special thanks to everyone who helped set up, those who marshalled, ran the rego desk. Nath who burst back onto the CX stage with his sweet timing system spitting live results onto the internet for those by the tape and those stuck far from Darebin. To the golden tonsils of Brendan and the officials from Cycling Australia and MTBA, we thank you.

Western Scaffold - Not a sponsor per se, but they were willing to entertain one man's crazy idea and worked to come up with a solution that levelled up Australian Cyclocross. Thanks Brendan & all the crew.

SRAM & CycleOps at Monza- couldn’t have done it without ya.

Tim from MY MOUNTAIN gave away a whole godamn cross bike to a deserving Amy Philips- a whole bike!!

Van from Creux- we love you, your shirts, your patches, especially your mannequin.

Fitz Rev, for their continued support, I bet DC is glad he wasn't offering free bike washes this time around though!

Impact Massage, not only the DDCX official vehicle sponsor, but always willing to sponsor a holeshot or a QOM/KOM prize.

Coffee Supreme, we love your Fresh Pots, especially at 7 in the morning when we're setting up a course.

Benedict & the Massage Oil Shop for continuing to support the women's podiums.

Commuter Cycles, always sponsoring the supercommuterest racers who actually pin a number on instead of Cat Six-ing it along Canning St every morning.

Larrys Custom Cycles - These guys give us frames to give away to deserving race non-winners EVERY ROUND. How sick is that?

4Shaw / Dion - Podium shoes are nothing without some matching podium socks.

Adidas Eyewear - Win a DDCX race and you can get your hands on some blazing yellow halfrims.

Rapha- For the women's prize pack and a sweet umbrella

Treadlie - The photobooth of muddy pain will be up soon, check them out and vote for your faves, and the best will win prize packs.

For more words about the weekend's racing, plus audio interviews, check out our friends over at BrewCX

There has to be a million photos and videos out there, and we want to see them all. Send us your links, via email, twitter, FB, commenting below, carrier pigeon...