My Name is Mud

There’s nothing like the smell of cross in the air to stimulate the senses and in Melbourne over the weekend sensory overload was the order of the day.


After the first round of the Champion System/SRAM Australian Cyclocross Series in Port Melbourne, the eyes of the Australian CX scene turned to the picturesque Darebin Parkland in the inner north for Round 2. 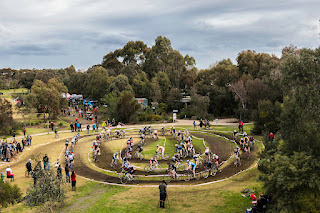 
The weather was Melburnian to the max, warm sunshine one minute, freezing and threatening with rain the next. The surface was spongy and the mud, well you know, it’s mud and there was lots of it.


One of the perennial crowd favourites, the kid’s race kicked proceedings off and today’s was probably the best yet. Sadly though, the big turnout led to tears at registration as the race sold out quicker than you can repeat the eleven times table.

Open racing often leads to the cross over to cross. In the past, people have attacked the terrain on unicycles and home built BMX tandems.


Things are getting serious with dedicated mountain bikers and spill overs from a sold out B Grade making the competition strong.


Indeed the spirit of DirtyDeeds, Tate came with more costume changes than usual. Such is Tate’s dedication to physical purity he ditched the bike and jogged some of the course.


DDCX design maestro Sime failed to watch the clock and rushed to the start,  this was to be his downfall, having to take a 'nature break' halfway through the race. That number two may have cost him a podium number one. We'll never know.


B Grade cross today was as full on as it gets due to the fact that many who race A grade had missed out on rego. You’d think this would mean one of the semi-pros or cross veterans would have easily taken control of the race huh?


Well, no. The greatest surprise and thrill for us at Dirty Deeds was seeing 14 year old Liam Jeffries take apart other more seasoned cross racers with a style that blew riders and spectators alike away. To be fair Liam had won under19/C grade then backed it up ten minutes later for a 3rd in B on Saturday.

Commuter Cycles’ Huw Vellacott’s attempt to attack Liam while riding a single speed bike complete with porteur rack proved fruitless. Perhaps Huw shouldn’t have dropped off a load of bread to the catering tents mid-race. Nevertheless, he managed to hold off Snozz and secure second place while Liam cruised through for the win.

By the time the Women’s Elite/ National Round was ready the crowd had grown to several hundred stimulated by cowbells and burgers from our friends at Beatbox Kitchen.


The turf was well turned by this stage so the racing was a lot slower than the day before which took its toll on some of the riders who’d blitzed the drier course. 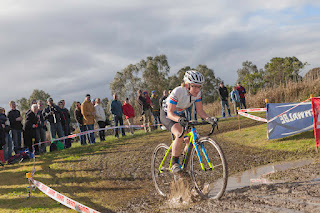 The race quickly split and Lisa Jacobs, star of the national road series, established a dominance over the field which was as impressive as it was inspirational to anyone thinking of taking up CX.


The Women’s national series has raised the profile of cyclocross and it will remain a fixture on the national calendar as long as the quality we saw on Sunday remains.


It’s Lisa’s first attempt at cross- she hit the course like a seasoned professional, taking the lead early, gracefully tapping away on the pedals and tackling barriers with ease. 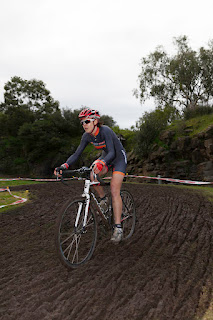 
Lisa and Melissa Anset fought it out for much of the race but Lisa’s unbreakable rhythm on the pedals saw her come clear for the win. Diane Nelson suffered a mechanical and ducked off the course to grab Paddy's bike then rejoined in the finishing straight. Unfortunately this was right in front of the judges and she was DQ'd. Larry's Custom Cycles also saw this and awarded her a sweet new frame to ease the pain. 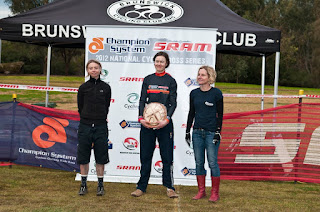 
The Men’s National Round was welcomed with hoots, heckles and...yep cowbells. It was one of the fastest starts ever seen at Dirty Deeds. After a win on Saturday Luke Fetch was expected to take it to the limit again but big things were expected of Dirty Deeds favourite Lewis Rattray. After finishing  fifth in round one Lewis pulled out all stops in his home race.


In cross racing everything sometimes isn’t enough , especially backing up one day’s racing with another. 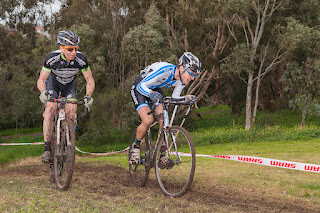 In the end Adrian Jackson soared to the front of the pack leaving any competitors in a mud spattered wake. AJ is another DDCX alumni and took full advantage of racing on his home ground. He finished well clear of what was a ding dong race for second and third between Lewis Rattray and Lachlan Norris. In the end Lachlan got the better of his Giant team mate, after Lewis mistook the laps remaining and burned too many matches a lap early leaving nothing to keep his engine firing on the bell lap. 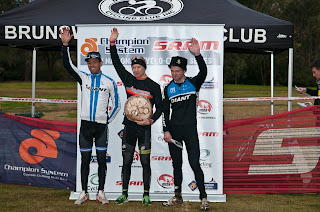 And, finally, a video of B Grade

And a video of women's A Grade