A Character To Play. 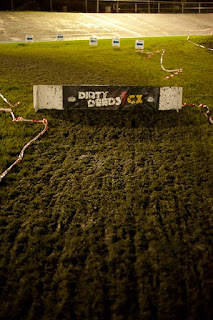 The 2011 Melbourne Cyclocross Season kicked off in style on Friday night with the Dirty Deeds Urban Cyclocross Prologue taking place in front of a massive crowd at the Harrison Street Velodrome.

Organizers had stated in the weeks leading up to the event that this was no ordinary Cyclocross race, but rather would be a number of events befitting the nature of a prologue. A taste of cyclocross, an hors d'oerve tray of muddy, sandy, grassy action. As such, each rider participated in two short, fast races - the first of which would be a scratch race, and the second of which would be a hastily-prepared handicap. Riders were divided into three categories - those with Cyclocross bikes, those with any other kind of bike, and kids! 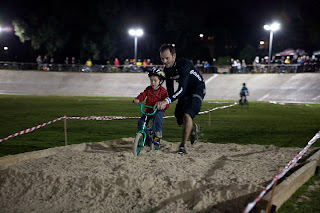 Here's Mark Sartorel, aged four, battling his way through the sandpit, when he probably would've preferred to stop and build sandcastles. And that's his dad, who helped him out and occasionally lifted him over the bunting, in order to stop him drowning in the mudpit. 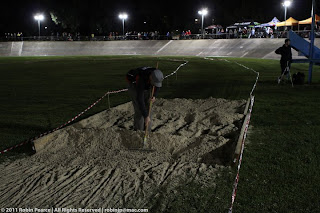 Mark was not the only one tempted to play in the sandpit, however. Local legend Rhino took it upon himself to craft elaborate patterns in the sand, and it was his crafty constructions that wreaked havoc with the riders. It was difficult to maintain a straight line through the pit, and as such it was the site of a number of hilarious incidents. Liam Jefferies from Trailmix totally dominated the kid's race, winning both the scratch race and the handicap, in the process showing why he is the under 15 national mountain bike champion. For his trouble he scored a total of $15 worth of gift certificates at the Brunswick Cycling Club canteen - that's a hell of a lot of redvines and sesame snaps. I'd like to apologise to Liam's parents for him being a little hyped up on candy last night. 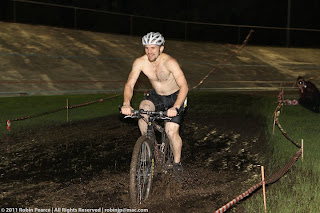 The Open Class scratch race was up next. As per usual, the Open Class featured both wacky bikes and wacky outfits. Here's one J. Vella, braving the near-freezing temperatures and stench from the mudpatch. As there were only 21 competitors in the Open Class, only one race was run, and this was fairly dominated by Stuart Brown (perhaps only because I told Liam Jefferies he couldn't ride with the big boys). Stuart went home with some bar tape and a pair of socks for his trouble.

The CX class was randomly split up into four bunches, each consisting of about twenty-three riders. Competition here was pretty fierce - there was a distinct lack of crazy outfits, and a distinct abundance of fancy bikes with carbon wheels. In the first race defending Dirty Deeds Urban Cyclocross Champion Lewis Rattray proved that he was equally comfortable over a short distance by taking home the biscuits. The second race was a close affair, but was eventually taken out by Footscray Cycling Club's Adam Trewin. 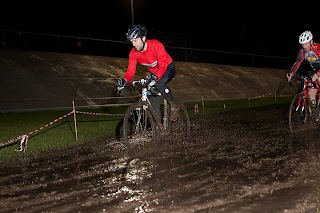 Jeremy Soawyer, pictured above, had been suffering from the flu all week, and was pumped up to the eyeballs full of Sudafed, but still managed to take out the third race; and Alex Meyland, who before this evening had never even thrown a leg over a Cyclocross bike, took out the fourth race with ease. 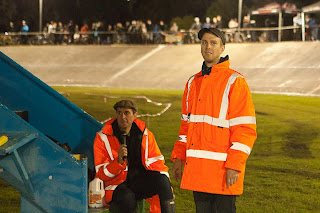 Around this time the commentary team - pictured above - were approached by the good people at Larry's Custom Cycles, who were keen to announce that they had already chosen a winner of the prize for best dressed. 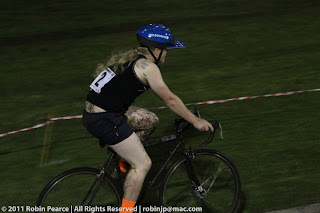 The prize, however, was quickly renamed by the good folks at Larry's the award "For Most Mud Down Their Buttcrack," and there was no question that this should be taken out by Tate, who won a sweet frame and fork set for his stinky, stinky trouble. Here he is, showing all and sundry why he was so rewarded. 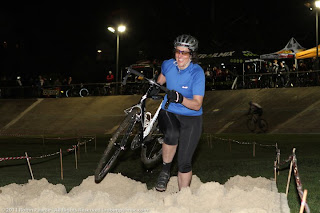 The Open Handicap was up next, and once again the sandpit proved the greatest handicap of all. Here's Ann-Michel, who had spent most of the day helping the Dirty Deeds Team prepare the sand, suffering for her good deeds. In the handicap races riders were asked to stand in the order that they had finished in the scratch race, and as the judges had only taken the top three results, riders were asked to use the honesty system, even if, as our chief commissaire stated, "cheating and lying would probably be quite beneficial."

Riders must've been relatively honest, however, as all night the handicap races threw up unusual winners. The Open Class was no exception: Cam Mackenzie seemed thoroughly bewildered to win, and was more excited to be interviewed after the race. 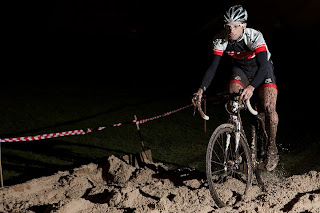 The Cyclocross Handicaps were closely fought affairs, with backmarkers often ending up on the podium but never able to crack the win. The first race was taken out by Tom Kurka, with Rattray again making a strong dash to the line to clinch third. The second went to Michael Dann, who just held off Adam Trewin - pictured above - to take the prize. The third went to Tristan Baker, with daylight second. And the fourth Cyclocross Handicap was the closest race of the night, with Llewellyn Thomas stealing the win from Troy McKinna right on the line.

As the night drew to an end talk inevitably turned to the next race at Darebin Parklands on June 16th. What would the Dirty Deeds Organizing Team dream up next? Stairs? Ice? A Rope Swing? A Jungle Gym? And, more importantly, would we be able to get the sand out of our drivetrains by then? Fortunately a visit to the Splashdown section - which consisted of a highpressure hose and a gold coin donation to the Brunswick Cycling Club - helped answer the latter question. As they rode off into the night their bikes were mostly clean. It was only their clothes that stank.

Full results too all of the races available here.

And finally, here are some more pictures of people jumping over the barriers. What kind of crazy mixed-up sport makes people carry their bikes over things? This is madness! 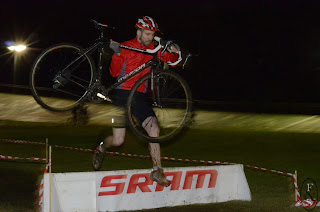 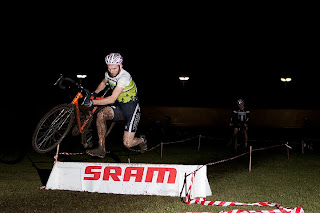 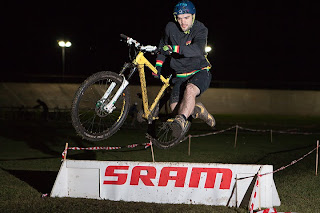 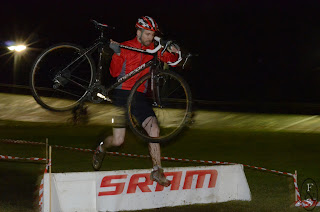 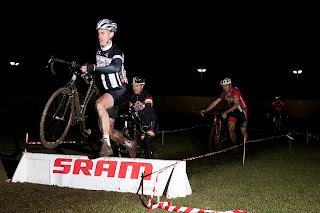