Another glorious Sunday afternoon, another excuse to get down and dirty in a local park. This time the venue was Darebin Parklands. They took a lot of convincing to let us stage the event there. I'm sure they won't be regretting their decision at all right now. 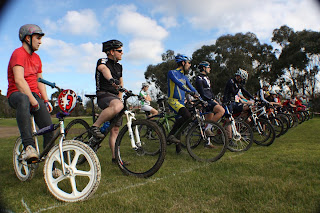 The Open Category was again dominated by mountain bikes, but there were some notable exceptions. Aside from the obvious, there was a nobr akes battle happening between two madmen on fixies, and some random guys who seemed to just be riding by on their commuter bikes when they were entangled in a bike race. I'd love to be there when they try explaining to their wives why they were three hours late and filthy. 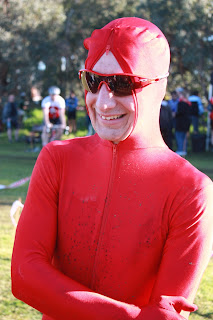 We had mentioned during the week that Northside Wheelers had offered to award a Rapha Jersey to the best outfit. John Groves here was obviously after some Rapha. He didn't get it, but did inspire some of the best heckling of the day. 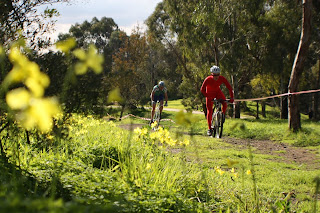 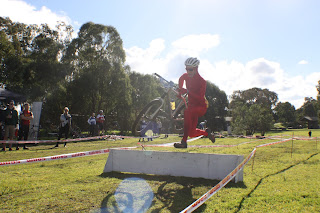 The thing is, if you rock up in an outfit like that, you've either got to be absolutely crap, so crap it's cute, or be able to totally pants everybody else. By the end of the second lap, Groves had shown that he was of the latter category. 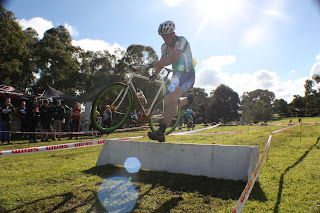 Last month's second place getter Matt Gray rolled up for another crack, and formed one half of the bitterly fought fixed-gear CX battle. 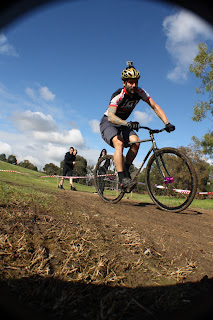 The other half was Jay, who did not win. Lucky he got some sweet footage from that helmet cam. 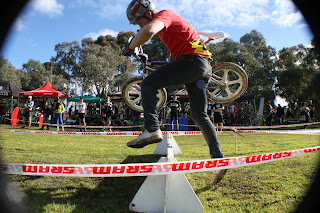 Mr Dylan once again rolled up on his '86 Diamondback, and was this time able to match his faceplate number to the number pinned on his shirt. On hearing that there was a five dollar spot prize going to anyone who could bunnyhop the barriers, he gave it a good crack, but succeeded only in knocking the barriers over. The five dollars eventually went to some big bloke wearing a camelback, hushing up hipsters everywhere. Not to be outdone, Damoh Hodges had a crack, but clipped his rear wheel on the wood, sending his bike cartwheeling into the air and him face first into the dirt. He doesn't remember much of the two laps after that. He did, however, win some coffee from Supreme for his efforts. 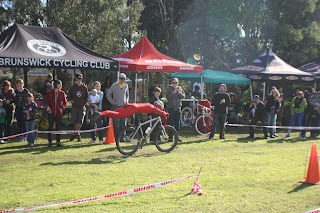 Groves eventually won the category, and committed himself to a victory salute that puts all others, including Mark Cavendish's stupid "Hanging on the Telephone" salute from last year's Tour. Matt Gray again took out second, and Dyon Balding once again took out third. Look for those two to gang up on whoever is coming first next time around. First girl went to Helen Newman, followed by Emma Caddy and Jess Morgan. 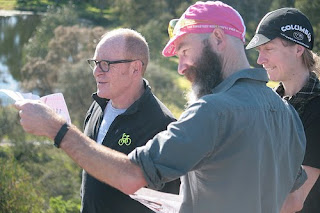 The CX category was up next, and the field was pretty impressive, boasting a number of A grade roadies and former Euro Pros. Discussions about the form of various riders (and their favourite places to get coffee) were becoming heated. 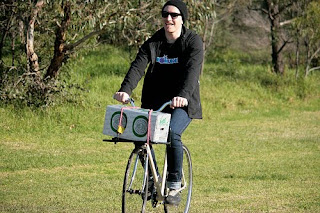 Once again the course featured a hill that riders were forced to run up, ride down, then ride back up again. This hill became a key vantage point for spectators to both encourage and humiliate riders, as well as enjoying a few cold beverages in the afternoon sun. 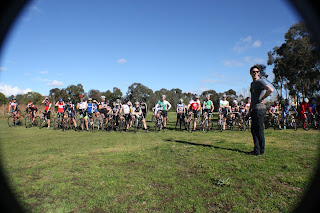 For perhaps the first time ever in the history of bike racing, all the riders were assembled before the commissaire was present. Thus it was left to the poorly-equipped commentary staff to explain the rules. And tell poor taste jokes. 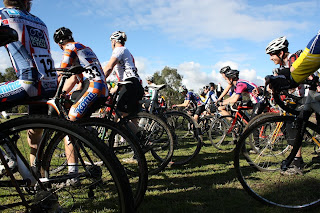 Some of which were appreciated. 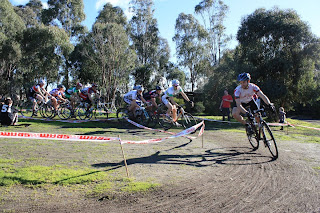 In the commentator's eagerness to fill the conversational void, he offered a five dollar spot prize to the person who rounded the first corner in first place. This set the scene for much headbutting and elbowing for position, but also allowed my cousin Dean's best mate Jeremy Soawyer to set the tone for the rest of the day. 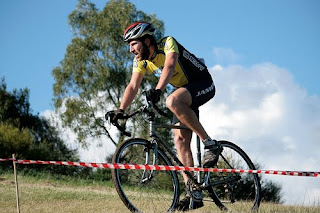 The all-star cast once again included Samuel W. McGregor, who managed to hold on to the breakaway group of riders until, perhaps still recovering from his State Title Winning performance last weekend, he was dropped on the second last lap. This race different significantly from the last, in that the long sections of paved course meant that riders largely stuck together, forming large groups, attacking each other, regrouping - just like a road race. Either that or they'd just been watching too much of Le Tour. 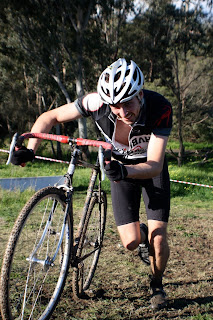 Huw Vellacot, of Commuter Cycles fame, rolled up with two spare tyres wrapped around him and a Peugeot Bike from the mid 80s. Perhaps he too had heard about the Rapha Jersey up for grabs. 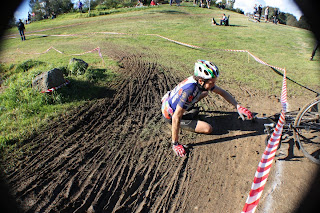 Some of the off-camber corners were tricky. Desperately searching for something to say about the middle of the pack riders, the commentator invented a struggle to the death battle between Nik Cee, pictured above, and Blakey. While Nik won, they were later seen holding hands together in the lengthening shadows. 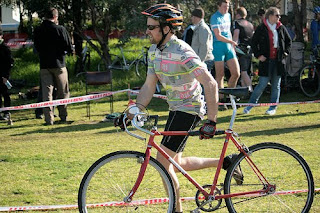 A prize for best outfit went to Mark Gilligan, who not only rode a postie bike in the CX category, but also dragged out a jersey that his mum must've bought for him at the Dandenong Markets in 1985. He was last spotted wearing the woollen 'Made In Australia' jumper featured on the cover of Women's Weekly in March of the same year. Consistent! 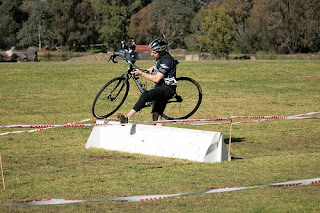 Despite there being literaly thousands of photos of this event online, I can't seem to find one of the CX podium. So here's a gratuitous picture of the winner of the 'King of the Hill' award, Benzy. This award went to the rowdiest, drunkest, loudest rider, and Benzy was a willing recipient, though he was at pains to insist he did not DNF. He won a sweet Fyxomatosis KoM shirt, which we didn't know we had until Andy arrived with his dog.

First girl went to Alison Heskes, who was controversially awarded the Rapha Jersey. When quizzed about his decision, Malachi from Northside Wheelers said she was easily the most stylish, then told everyone to fuck off. There were no second and third place getters in the girls category, as there were no other girls. Some of the girls in the audience seemed very interested in the possibilities here.

Third place went to last month's winner of the Open category, Lewis Rattray, who obviously decided in the spanning month that there was something to this whole CX malarky. Second place went to Mikkeli Godfree, whose name the commentator didn't once pronounce correctly. And first place went to Jeremy Soawyer, who has obviously been benefitting from coming out for rides with me on every other Sunday Arvo.

Special thanks once again go to:

The good folks of the Darebin Creek Management Committee, for taking a chance on some dirty unshaven cyclists with bad tattoos, who swore black and blue that a) the park would be the same Sunday night as it was Sunday morning and b) they wouldn't have loud music or amplified commentary;

Everyone who came down early and banged in stakes, hung up bunting, took orders from Nath, set up tents and generally helped out;

The most excellent peeps running the bake sale - as well as raising a ridiculous amount of money for Edgar's Mission, they kept me well fed all day with cookies, cupcakes and occasionally sarcastic remarks;

The riders. Especially the fit guys who won and the unfit guys who had fun. You guys rule.

I'm sure more are on their way, including a number of films of the event. I'll edit them in when they arrive.