The Prologue- it's all because of you 
The biggest crowd for a cyclocross event in Australia hit the Brunswick Cycling Club's Velodrome on Friday night for the prologue of Dirty Deeds 2012.

We sold out early which was a bummer for some including those who'd travelled from afar.

The build up for this season has been pretty big and from the look of some of the bikes on display things are getting serious.

Once again the cyclocross gods were kind and we had rain during the week and fine weather on race day.

We were also relieved Mr New Timer Brendan Bailey was there to take up commentating duties, despite his insistence swilling vinegar was good for the the throat. Things wouldn't be the same without him so we're thankful he's back in 2012. Everyone got two heats which involved two laps of the course per heat. The prologue is run within the confines of the velodrome so Nik had to do his devious best with limited space. Luckily he was able to include a stomach churning 'Spiral of Death' in one section which even tested the skills of the likes of Lewis Rattray. Two laps? some scoffed... the same braggadocio wasn't on display after the first heat.

First up was the kids race and when we say kids the spread was from two to 15. The biggest raps from the 500+ strong crowd circling the velodrome came for the youngest competitors as they negotiated the mud with what seemed like ease. They were the lucky ones as the mud began to stick as each round progressed.


Co-commentator and committee type Hamish noted that this was the first race in which we've seen a pink cape deployed as part of race strategy/ bling. This prompted discussion over whether or not capes would provide the extra edge some needed. The soundness of this theory was tested later. 
Everyone's happy when the wizard walks by.

The open race is when the crowd and racers started to really get going. A notable absence was our regular unicyclist but we're hopeful Matt Thomas is going to be back showing off his superior balance skills come round one on the 15th of July at Darebin Parklands. Matt did however win his second heat on the CX class proving two wheels pose no problems.

Jarad Kohlar and Steve Duggan won heats one and two. Steve, started the race in full cape and beard in homage to the wizard staff teams in the crowd. In fact some DDCX regulars opted to forgo racing in favour of linear can construction. Why? We still don't know. 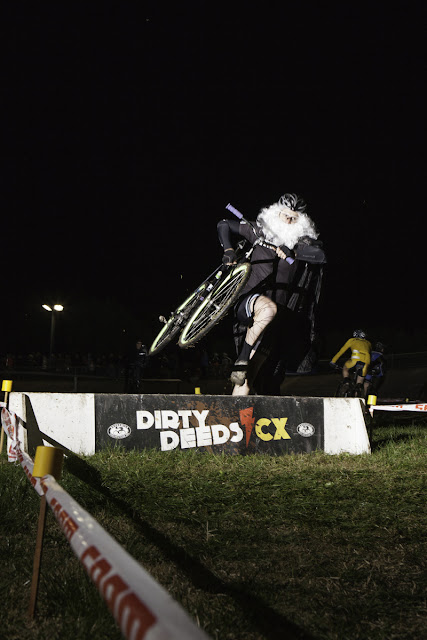 Women's Cyclocross is here to stay

The proudest moment for DDCX was our first women's race. We've been aiming for this for a while and through no small effort on behalf of committee peeps, Nik Cee, Blakey and especially Kate Lansell, we managed to draw a strong field that was dominated by Mel Ansett. The men's cross category was split into three races with 30 riders in each.


It was excellent to see Lewis Rattray back, winning on his home turf again. For those who don't know, Lewis represented Australia in the European CX season this year and did us proud. He started his second heat a lap down and still managed to overtake a couple of riders. Will he dominate again this year?

We're pleased to say the trash talk was kept to a minimum by chief commisaire Dave Morgan, but pro peleton inspired head butts and elbows slipped through.

This is what it looked like thanks to Mikkeli Godfree from Enduro magazine whose go-pro managed to stay the course. pic courtesy Baudman
DDCX stalwart Leigh De Luca made up for binning it in heat 1 by taking out his second heat handicap and brought/gave the love.

Dirty Deeds wouldn't be what it is without the people who come to watch and race (all 143 of you).

The crowd surprised us all and the stage is set for our biggest CX series yet.

Thanks to the sponsors (listed right), Brunswick Cycling Club and most importantly, everyone who came to watch and race, not to mention those who stayed to pack and clean up.